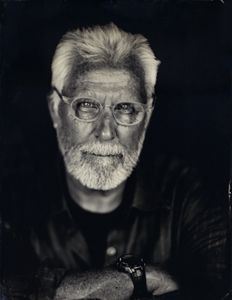 Having enjoyed a misspent youth in the New Jersey, New York and Boston area, David Palmer migrated to Los Angeles in the early 70’s. There he continued his incredibly long childhood by singing for and writing songs with the likes of Steely Dan, Carole King and Steve Tyrell. After twenty five years in the music biz, Mr. Palmer discovered he had a passion for digital photography and digital images. He’s spent the last ten years shooting and retouching and, in general, learning the craft. Over time he has developed a style he calls Romantic Realism.

The writer and artist, Peter Sacks, has called Mr. Palmer’s photographs “intriguing and mysterious in their blends of image, implied narrative, setting and character - there are entire worlds there on that threshold between very clear reality and imagination or fantasy. A kind of photographic equivalent of magical realism, weird and alluring...”

An acquaintance asked: “Is Victorian Romantic Realism the same thing as Steam Punk ?” The artist replied: “ Steam Punk is an edgy, grungy tribute band from a bygone age. My Victorian captures are Classic Rock. They’re an attempt at a romanticism that probably never existed but dressed up really well...”